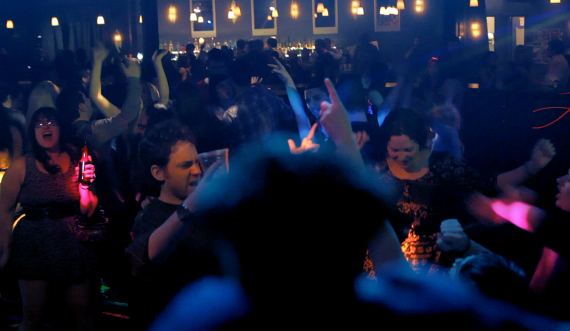 Angry muffin was baked in 1982, in the city of Halifax, Nova Scotia. The son of a pastry chef and a guitar playing prostitute, he developed an inclination toward music and the opposite sex at a very early age. It seems his desire to hear new music – accompanied with pictures of sexy, naked women – was completely insatiable. His mother, whose nose was always covered in her husbands finest baking flour, exposed him to the raging sounds of classic rock, hair metal, early thrash, synth pop, and uh, regular pop.

In the early 90s he moved to the nation’s friendliest and most outgoing city: Toronto. This is where the young Angry Muffin was seduced by the cities burgeoning rave scene. The outrageously gorgeous little girls and their glowsticksmade him very happy and excited, and he just needed to be a part of it all. Unfortunately, he had troubles integrating into the social scene due to various prejudices, so decided to take up music production to earn their respect. He was immediately praised for his talent by all of his peers, and some DJs even played his music in front of thousands of dangerously dehydrated children!

In 2012 – and much to the fanatical joy of the electronic music world – Angry Muffin finally decided to record his debut album. Angry Muffin’s music draws from his deepest feelings, which include isolation induced depression, euphoria, confusion, anger, paranoia, despair, emptiness and desperate longing. Sometimes Angry Muffin is happy so he makes a happy song.