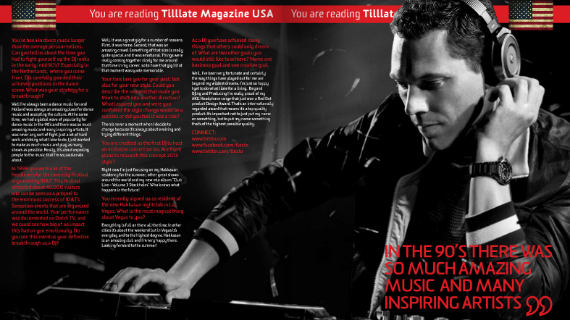 Tiësto is a performer who has transcended musical genres to create a global “Tiësto” brand. His achievements include: a Grammy nomination, numerous MTV awards, performing at the opening ceremony of the 2004 Athens Olympic Games to an audience of billions, and even a wax statue at Madame Tussauds. With over 11 million friends on Facebook, 1 million followers on Twitter, close to 300 million hits on YouTube, his globally syndicated Club Life radio show as well as his Club Life iTunes artist podcast (#1 music podcast globally), Tiësto has truly become a universal phenomenon. Voted ‘The Greatest DJ Of All Time’ by Mixmag in 2011, Tiësto has worked with superstars such as Kanye West, Coldplay, Katy Perry, Nelly Furtado, Yeah Yeah Yeahs, Goldfrapp and many more.

2012 was Tiësto’s biggest year yet with a series of unique promotions which includes performing the first concert live-streamed on Twitter (in partnership with HP and Intel); his 10-part “In The Booth” YouTube documentary series; the unveiling of his brand new state of the art mobile app for iPhone and IPod Touch; the launch of Tiësto’s own “Club Life” Sirius XM channel; the release of his “Club Life – Volume 2 Miami” mix album (including his chart topping remix of Gotye’s “Someone I Used To Know); and his brand new range of headphones for AKG and a fashion line with Guess.

Tiësto topped the year off with by partnering with (RED) to release an exclusive compilation album, DANCE (RED), SAVE LIVES, followed by a global livestream – powered by YouTube – from Melbourne’s Stereosonic Festival over World AIDS Day weekend on December 1st and 2nd. The compilation features an exclusive collaboration between Tiësto and Bono on U2’s ‘Pride’ with all proceeds going to (RED) for the Global Fund to fight AIDS.

Tiësto enters 2013 with on fire with the much-anticipated follow up to his groundbreaking “Club Life College Invasion Tour,” which saw Tiësto embark on a two-week tour of college campuses across the United States. The tour culminated with a sold out event at the Home Depot Center in Los Angeles where Tiësto performed before an audience of 26,000 fans – making it the largest single headline DJ show in United States history. The 2013 installment of Tiësto’s “Club Life College Invasion Tour” commences on February 19th in Syracuse, New York and winds its way through the United States until early March.

Other key endeavors in the works includes Tiësto’s return to Los Angeles with a headline performance at STAPLES Center on March 2; several brand new original tracks and the third installment of his “Club Life” compilation series on Musical Freedom; the one year anniversary celebration of his Sirius XM “Club Life” channel during Miami Music Week and the launch of his new 20 month residency with Hakkasan Las Vegas Restaurant and Nightclub – opening at MGM Grand Hotel & Casino in April.

Established in 2010, Tiësto’s self-owned record label, Musical Freedom, is home to all of his own releases as well as those of other artists. Musical Freedom holds a number of gold and platinum records with each release hand-selected by Tiësto himself.